Make This Simple Change to Your Lifestyle to Prevent Alzheimer’s

While some diseases damage your organs or your bones, Alzheimer’s is a disease of a different class – one that destroys your mind. It takes years to develop but, by the end of it, your loved one is likely to be a shell of their former self. They may not remember who you are or the details of their own life. It’s heartbreaking to witness but even more so for the person going through it.

According to the Alzheimer’s Association, over 5.7 million Americans are living with Alzheimer’s and that number is expected to rise by nearly 250% by the year 2050. Alzheimer’s is the most common cause of dementia and the sixth leading cause of death in the United States. More than that, caregivers provide more than 18 billion hours of care for Alzheimer’s patients year – an estimate valued over $232 billion.

Though many people assume that Alzheimer’s and other forms of dementia are a natural consequence of aging, that simply isn’t true. It is a progressive and irreversible brain disorder that destroys memory, thinking skills, and eventually the ability to perform simple daily tasks. If this disease isn’t a natural consequence of aging, then it must be preventable, right?

New research that suggests a simple daily lifestyle change could prevent or at least delay the onset of Alzheimer’s – keep reading to find out what it is.

What Are the Early Signs of Alzheimer’s?

Alzheimer’s is a disease of stages in which symptoms worsen over time as the disease progresses. In the first stage, no symptoms are present, and the patient has yet to experience any memory loss or other signs of dementia.

Once the patient crosses into the second stage, however, minor issues that hint at a developing problem may become evident. Here are some of the early warning signs of Alzheimer’s:

Unfortunately, by the time moderate to severe symptoms of Alzheimer’s set in, it is likely too late to make any significant changes to the patient’s prognosis. If your loved one doesn’t already require help with self-care and daily tasks, they likely will soon.

Could Taking the Stairs Delay the Onset of Alzheimer’s?

While there are no treatments currently available that can stop or reverse the course of Alzheimer’s, there is new research to suggest that a simple change to your daily life could prevent the disease from manifesting or, at the very least, delay the onset.

What is that simple change?
Taking the stairs.

The results of a study published in a 2016 edition of the journal Neurobiology of Aging suggest a correlation between regularly climbing stairs and a younger brain age.[1] This study involved 331 participants aged 19 to 79 and measured brain health using MRI scans to determine the volume of grey matter – this is a visual marker of neural health in aging. In addition to MRI scans, researchers also asked participants to complete self reports in which they provided information about their level of education and their level of physical activity.

What the researchers found was that, for every flight of stairs a participant climbed each day, they had a higher volume of brain matter – a volume equivalent to about 0.6 years younger.

They also found that for every year of education a participant reported, their brain looked almost a full year younger.

While this single study cannot definitively prove a link between climbing stairs and a reduced risk for Alzheimer’s, the results are certainly promising. They suggest that factors such as education and regular daily activity can keep the brain younger longer. While age is not the cause for Alzheimer’s, it does contribute to certain changes in the brain which can combine with other factors to set the stage for Alzheimer’s and dementia.

If you or a loved one is concerned about Alzheimer’s, making an effort to get some cardiovascular exercise on a daily basis is a good place to start. While other forms of exercise may also be beneficial, researchers chose climbing stairs as the subject of their study because it is a form of exercise that older adults are generally able to accomplish and can do so multiple times daily. 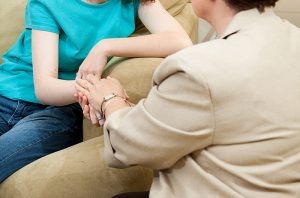 The Top 10 Warning Signs of Mental Illness You Should Know